beech cut-stump and movement to other species?

I received an email with the following question, and my response...below.  If you have experiences with cut-stump on beech (or other species that root sucker), please share your story and pictures.

if i do a cut stump treatment to control beech suckering, will roundup leach to or kill any trees near the applied beech stump?

this is my only concern about the application of roundup, I'm nervous about killing off oaks cherries and maples in the surrounding forest through the root systems. in your experience have you seen any sort of kill off of these trees from cut stump with roundup?

In the research that I did, and that of the USFS there was never (0%) any evidence of movement of glyphosate (the active ingredient in Roundup) to species other than beech.  We monitored adjacent upper canopy trees for 12 months following treatment and there were no changes in the health rating assigned to the crown of adjacent trees.  Also, glyphosate binds to soil organic matter and is non-active and non-mobile in the soil...if you spill some there shouldn't be any problems (but of course try not to spill).  Glyphosate is the most mobile of herbicides within the beech root system, but is non-mobile to other species.

You will want to use at least 25% active ingredient of glyphosate and as soon after cutting the beech as possible.  The glyphosate will move to the tallest root suckers you leave, so if there are numerous 3" to 5" diameter suckers those will preferentially take the glyphosate and allow less to move to the smaller beech whips.  So, the number of saplings in the different diameter classes matters.  The moral of this story is that if you have large saplings, try to cut and treat (and treat) as many as possible to allow for sufficient movement of glyphosate to the smaller stems.

Here's a picture of a stand at the Arnot Forest that we will need to devise a "beech plan" for.  Likely a combination of basal drill-n-fill just prior to harvest, with post harvest foliar and Garlon 4/triclopyr basal bark.  Picture by Brett Chedzoy 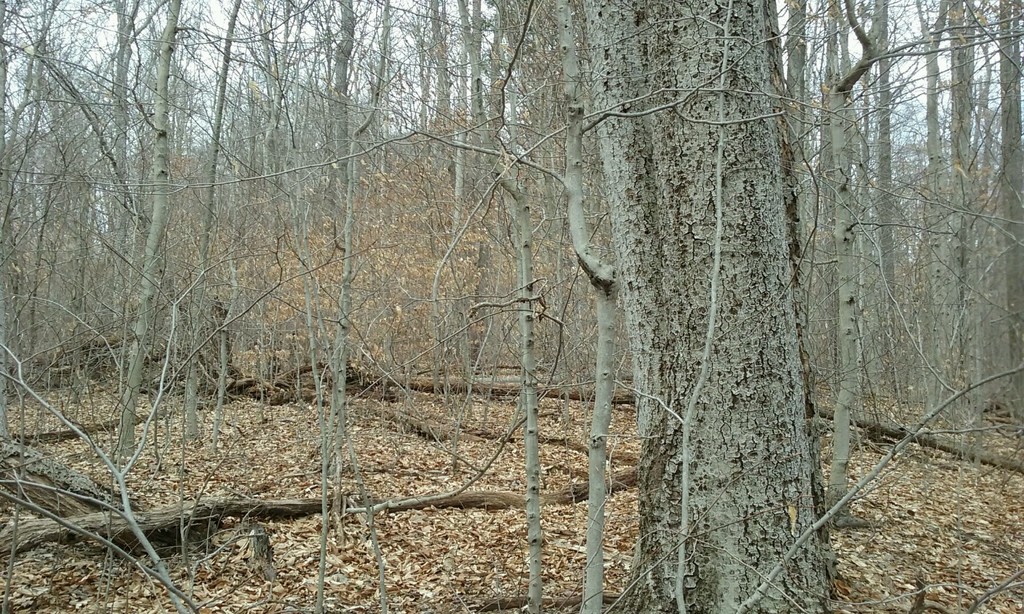 Replies to This Discussion

Very helpful. Thanks. Understood it very clearly until the last sentence. Basal drill-n-fill and foliar Garlon 4/triclopyr basal bark sound different from spraying the exposed end-grain of a cut stump.

In these same stands of beech that show heavy infestation by Beech Bark Disease (BBD), we are finding a handful of large, healthy trees that have no visible signs of BBD.  We plan to preserve these Beech in the upcoming harvest and do some further experiments & research to see if these apparently resistant trees can be propagated - and if their progeny will also show the same level of resistance (yes, this will take years!).  Beech has a lot of positive qualities: it's tolerant of shade, resistant to deer browsing, has valuable lumber (look at European Beech as an example), and is one of the top food sources for wildlife.  But its major drawback is the susceptibility to BBD, which in trees of little to no value for wood and wildlife, and which aggravates the problem of "beech brush" in the woods.

I'll be interested to hear how your experiments progress. We also have, in one particular stand, a relatively high percentage (but still less than 50%) of healthy beech trees. Are mature, healthy trees, over 12" dbh, necessarily genetically "immune" to BBD, or were they just big and robust enough by the time the infestation arrived, to resist infection? Will cut-stump treatment affect nearby healthy trees more than 6" dbh in addition to the beech saplings?

Jim,  those are good questions and Peter will likely have more to add to the following:

as this project moves forward, we will likely be looking for other apparently BBD-resistant beech in other locations.

i echo all of Brett's comments.

Cut stump will move at least 50 ft from the treated stump to other beech that are connected.  Big stumps have big root systems and a wide network of suckers.

Often reported (I haven't seen the research) is that 1% of beech clones (not 1% of stems) are BBD resistant.  My sense is that resistance is best indicated by a clean tree in the midst of infected trees.  BBD can infest trees of almost any size; at least I've seen them infected as small as 5" dbh.  I am not aware that they get too big to become infected.

Brett was describing an area at the Arnot Teaching and Reserch where we're planning a 30+ acre seed tree regeneration harvest.  There are a couple beech >12" dbh that have no sign of BBD. The rest look like the picture above. In the areas near our "clean" beech we will likely take the following steps.  The goal is to control beech except for those stems that are genetically identical to the clean beech.  We won't know if the root suckers are identical or not, so protection will focus on the large diameter clean stems. I have a related question and reading through this thread brought up another question I have always wondered about.

Brett says that beech lumber is valuable - look at European beech. Is European beech the same species as American beech? I have never heard much about use of beech for high grade lumber in the US - it seems to go for pallets and the like. I have the impression this is in large part due to its being difficult to dry without a lot of warping and checking. Have Europeans solved those problems, or do they have a variety of beech that is more easily seasoned?

Now the question that brought me here in the first place. I was talking with a friend the other day, and he said he was treating beech stumps with rock salt. After cutting the tree, he would use the tip of the chainsaw to cut a groove around the circumference of the stump, and fill it with salt.

This was new to me - have you heard of it before? Is it likely to be effective? The main reason for his choice was cost - salt is a lot cheaper than Roundup.

Dr. Nyland at ESF once made the comment that the lumber from European Beech (F. sylvatica) was "identical" to American Beech (F. grandifolia).  A wood products expert would have to confirm that.  Several years ago I attended the International Wood Products Expo in Atlanta.  The show was full of vendors touting the virtues of European Beech. For them, it's their premier hardwood species.

Another Dr. Nyland comment of the past (besides: "the only good beech is a dead beech!)) is that the the main difference between sylvatica and grandifolia is that the Europeans treat and manage their beech as an important timber tree, whereas we treat ours as a weed.  I believe that our technology for drying and handling beech lumber is also lacking behind Europe.

Over the years, I've seen plenty of beautiful flooring and locally-crafted furniture made from American Beech, so the potential is there.  What's probably missing is the attitude and effort to treat and manage Beech as an important timber species - as well as disease-resistant genotypes that are worth cultivating.

I took these pictures of a couple of the apparently resistant individuals that we'll be studying at the Arnot.  I wouldn't mind having some of these in my woods. 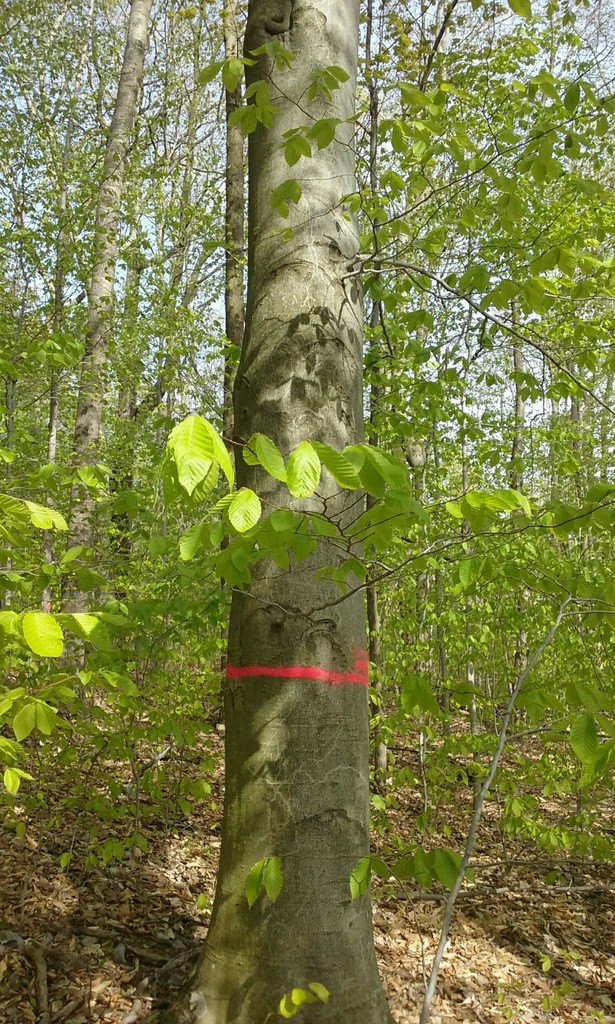 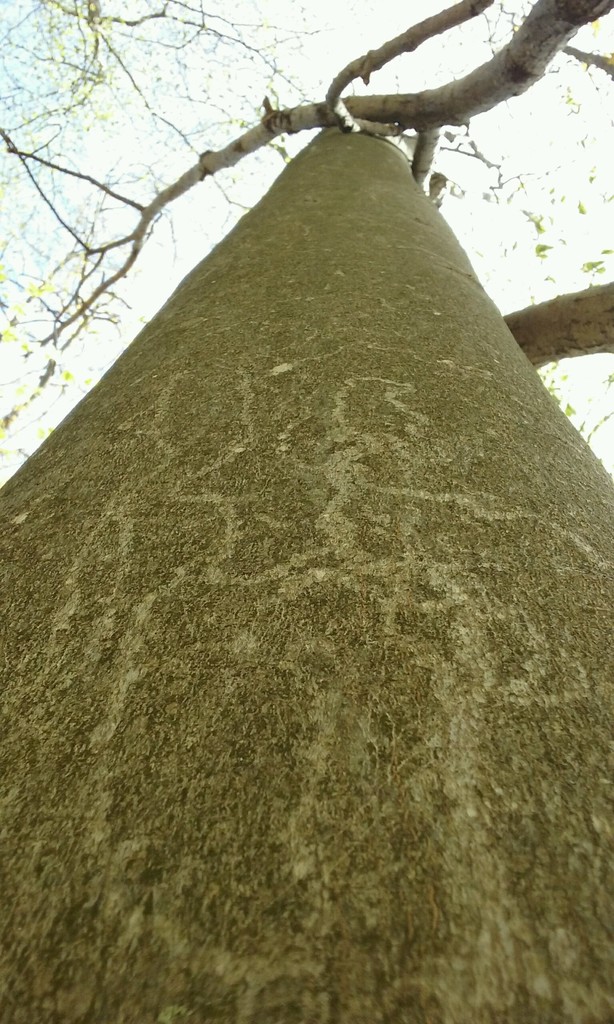 ... and I'll let Peter reply to the rock salt idea. I guess if you put enough sodium and chloride in your woods, you can kill just about anything.  Just look at the fine job the DOT does every winter of thinning back the encroaching conifers along highways.