Again, size maters. A large opening is much harder to secure than a smaller one. That being said, even if one is not expecting a need for larger equipment inside a slash wall it would not be a bad idea to leave just enough opening to accommodate any potential future equipment access need.

Try to plan for the “V” for human access to be alongside the slash so it does not look like an opening and gives more of an appearance of being a trap to deer because they cannot see past it. Therefore, constructing a more vertical slash wall edge on the outside of the wall at the opening should make the installation more secure for keeping deer out.

Yes, I know these gates are being constructed in forest conditions, on skid roads experiencing considerable traffic, and not nicely excavated job sites, but leaving the gate site without huge ruts and obstructions will make the gate installation much less complicated.

At a slash wall opening where frequent equipment access might be needed it is conceivable that if a straight, less valuable tree is left at the end of the slash wall at an opening a swinging gate could be hung. Gaps under swing gate big enough for deer to get through could then be filled in with lightweight welded wire or plastic mesh. A T-post could be used at the latch end of the swinging gate so a “V” style human gate could be installed.

On the more recent slash wall closings there has been much more damage to the plastic gates. Some of us believe there are 2 factors to be the cause of this increased damage. First is the much large sizes of the newer harvest taking up much more of the home ranges of deer families displaced by the slash wall exclosure. The second being the slash wall exclosure with the gates being damaged took about 2.75 years to complete giving the resident deer time to get accustomed to using the wall openings long before the openings were finally closed. Knowing the food resources available on the other side of the thin plastic has induced some to challenge the integrity of the fence. A couple of which have been successful and have learned from that success.

After 3 full years of exposure to sun and weather the plastics are starting to show signs of fatigue. The mesh fence has not started to break with impact yet, but the zip ties are. Many of the zip ties are breaking and popping off without much force at all. Therefore, fresh zip ties have been added at the more frequently used gates. 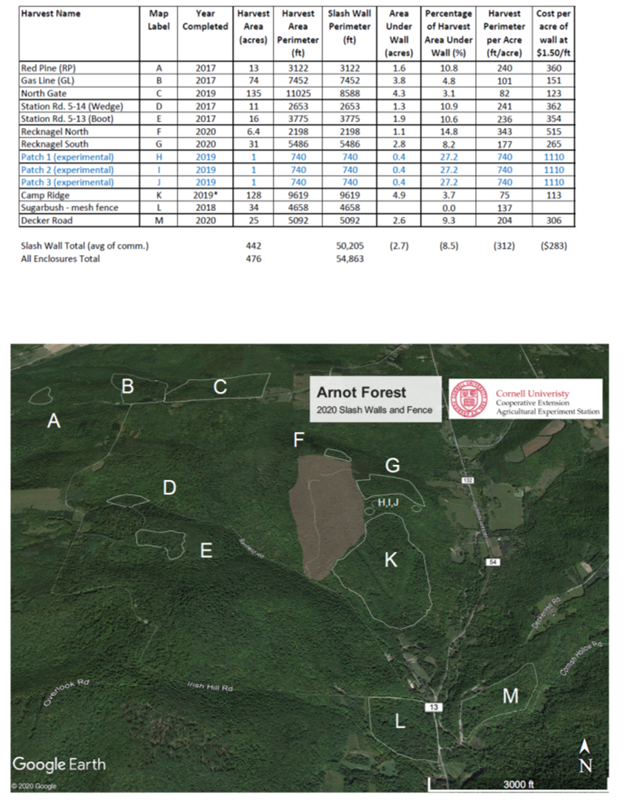 Yes, many times deer will adopt a trail that is the shortest distance between 2 points. However, this may be better stated that deer will take the trail of least resistance between 2 points. In the case of a buck scenting doe in estrus he will certainly want to take the straightest route. I am pretty sure I observed the desire to do just that this past fall. With approximately 0.85 miles of straight-line, east to west of slash wall along Irish Hill Road (harvests marked B and C on the above map) amorous bucks on Arnot property on the south side of the walls (and harvests) could be catching the scent of doe on the New York State owned land way over on the north. The buck in the following picture was captured in pictures several times at the access gate into what we call the North Gate Harvest slash wall (C). You can also see that a piece of baling twine used in an attempt to create the appearance of a 3D fence did not intimidate him.

More importantly I think it is the loss of the established home range of the resident deer that creates the most pressure on the slash walls and gate fences. Lose of home range and thus known food source locations is a logical explanation for doe repeatedly visiting the plastic fence gates at the slash wall openings.

My observations where I have been on the outside of the slash walls is that yes the deer are moving around the walls especially where travel is not impeded by slash or other obstructions. Deer are also concentrating their browse on the areas outside the walls opened to sun light by the timber harvest.

The only corridor or funnel area created by the Arnot slash walls would be the strip of land between the Camp Ridge harvest (K) and the Recknagel South harvest (G). There certainly was considerable evidence of deer traffic prior the 2020 hunting season and some after. 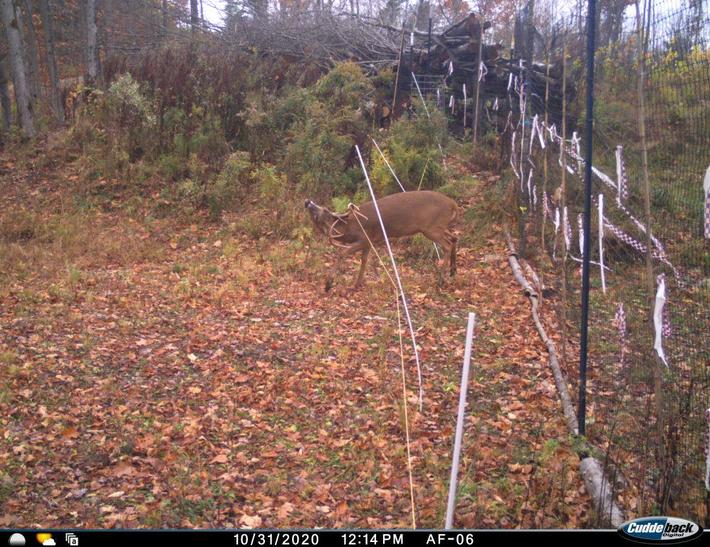 The flood gates constructed in the Arnot Forest North Gate harvest slash wall consist of sections of 8 ft. tall high tensile Page (woven) wire suspended from logs positioned over the creek openings. The fence is wrapped around the log similar to how woven wire would be attached to a fence post. Sections 2” X 2” square plastic deer fence are used to fill in the gaps between the straight edge of the metal fence and the uneven creek bank or slash wall.

As seen in the pictures below, there is a log over the downstream flood gate around which the wire fence is wrapped. It is about 10 ft. over the normal steam surface on one side and about 7 ft. on the other. On the high side the log sits on top of the slope that could be called a stream bank. On the shorter side the log is sitting on the slash wall.

High tensile Page (woven) wire comes in a roll and has a strong memory to continue to roll unless stretched. The weight of the wire itself is not enough to completely overcome this memory and keep it down close to the ground when suspended. Therefore a couple of hardwood (locust) post were woven through the openings of the fence near the bottom to add weight. This weight is keeping the fence straight and plumb in calm water conditions but is not heavy enough to prevent the wire from swinging up out of the way in high water conditions.

As far as woody debris in high water conditions we can only hope it will pass under the wire as it tips up without catching but in reality using a mesh fence is very likely to catch something. I suspect that even just high water pushing the fence up and tilting it will prevent it from coming back to a preferred position so making the effort to check it after know high water events should be planned for no matter what system is used for a floodgate. 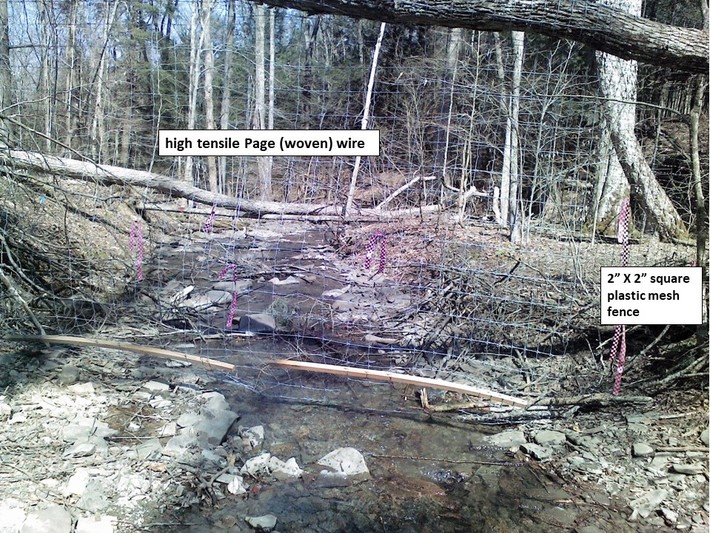 As seen in the picture below, the loggers left 3 logs across the upstream flood gate in the North Gate harvest slash wall. With the assumption even heavy rain during spring runoff would not bring the stream level up to the middle log, that one was used to support the high tensile Page (woven) wire fence. The bottom log was used to keep the suspended fence plumb. Smaller pieces of slash were also used to keep the metal fence close to the creek bed. Because of a staged or multi-level creek bank the top of the middle log is not high enough on the edges of the stream. Therefore, sections of the plastic deer fence were suspended from the top log and attached to the fence below the middle log for about 10 feet from each side of the opening. The stream center with the running water was enough lower that the fence height in the middle was enough to keep deer from trying to jump over.

The Village of Hastings-on-Hudson is hiring a p/t urban forester!

Appalachian Sustainable Development is searching for a part-time, regionally remote Agroforester to join our team! This new position will be responsible for providing technical and financial assistance to producers for alley cropping and…Continue

Started by Brett Chedzoy in Woodlot Management May 24. 0 Replies 0 Likes

A partial answer to a frequently asked question of recent months - what, if anything, is the DEC planning to do...DEC Announces Aerial Treatment for Spongy Moth in Six High Priority Forest AreasAerial Treatment Taking Place Through Approximately May…Continue

Started by Brett Chedzoy in Woodlot Management May 17. 0 Replies 0 Likes

Well over 200 registered for the March and April webinars presented by Zach Boerman and Suzanne Treyger of Audubon NY - showing that perhaps good forestry really is for the birds!For those of you who would like to watch or re-watch the webinars, the…Continue

I found an ingenious tool for applying herbicide for cut and paint. It is made by a volunteer prairie group in MI but no longer shipped. I am including a link to their page describing its use and with photos.  It appears to be made of standard pvc…Continue

Peter,I have been hearing a lot about mycorrhizae.  Much has raised  many questions.How  can one make mycorrhisae  either for an addition to planting or for later addition to an older plantation and also for gardening.How does it  interconnect with…Continue

We own a 60-acre eucalyptus forest in Pacifica, CA, just south of San Francisco.  Can anyone recommend a forestry consultant to prepare a wildfire risk assessment and mitigation plan?  California has suffered from large wildfires for the past two…Continue

Greetings,Appalachian Sustainable Development (ASD) is searching for an Agroforester to join our team! This new position will focus on alley cropping and silvopasture, and will be responsible for co-developing agroforestry trainings for natural…Continue