There's finally some frost in the ground, which has allowed the loggers to operate on some of the steeper ground.  Impressive road building! 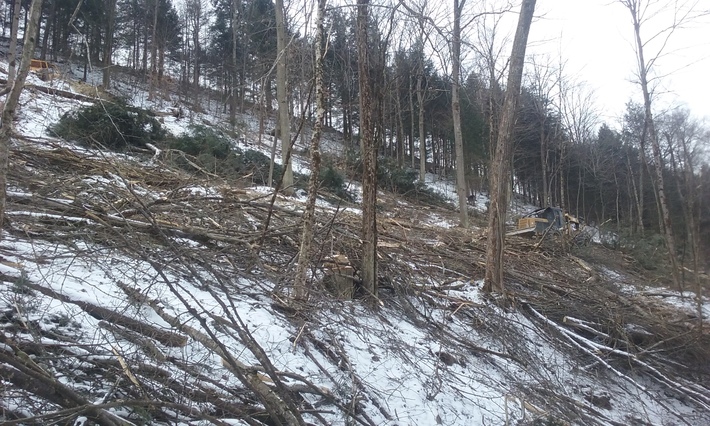 The cost of the slash wall versus plastic mesh fences...

The slash walls have been working very well.  We continue to tour groups through, and the reactions are always favorable. One of the redeeming features of the slash wall is its cost relative to the cost of plastic mesh installed fences.

We continue to refine the cost estimates of the slash wall. As of May 2019, the cost breakdown is within a cent or two, $1.50 per foot for the machine and operator and $0.75/foot for wood greater than 6" diameter. Total cost is thus $2.50 per foot.

We recently installed a plastic mesh fence around a 30-acre harvest that included a section of the sugarbush at the Arnot Forest. That cost (see attached price breakdown) would be at least $3.50 per foot, likely more, if we had contracted through a local vendor.  An added cost to the fence is for maintenance. Regular inspections and repairs are needed to prevent deer from accessing a fence that has been compromised.

picture of the fence here It helps to include about a foot of the fence as an apron, and then to weight the apron. 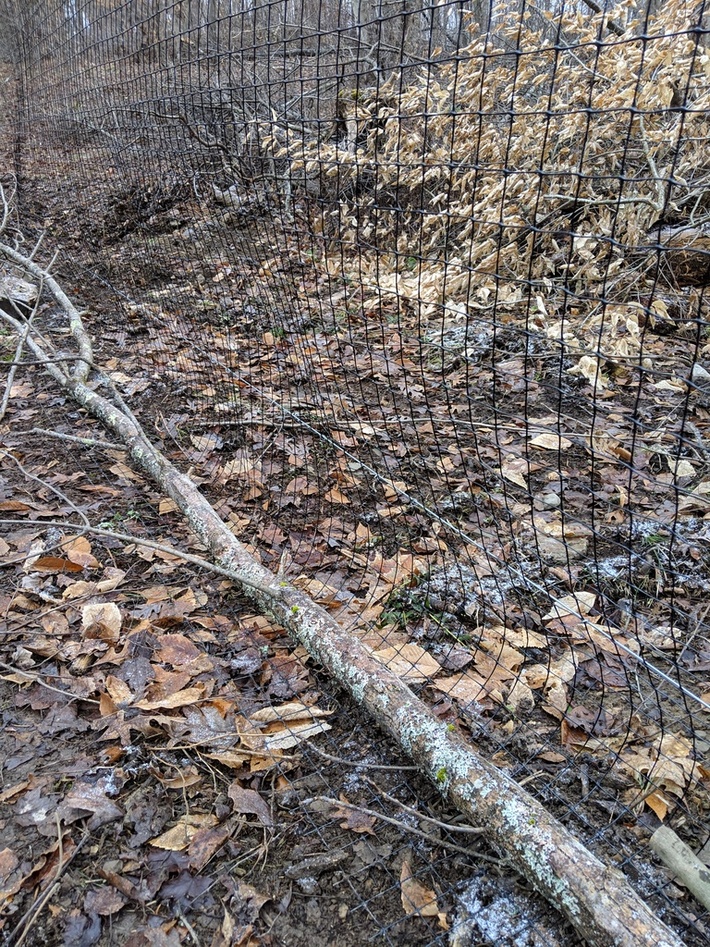 IT IS NOT CLEAR TO ME WHY ONE SHOULD REMOVE ALL STEMS GREATER THAN   1".  Isn´t it better to have desirable growing stock already there?

A second question: is does a partial slash wall slow down deer movement and create better regeneration possibilities?

Great question and one that merits clarification.  When we talk about removing all of the understory vegetation at the time of the harvest, it's for situations where practically all of plants are considered "undesirable".  Common examples would be non-native invasives like honeysuckle, multiflora rose and buckthorn, or problematic natives like beech brush, stiped maple or hop hornbeam.  These plants are fine in small quantities, but will likely interfere with regeneration objectives when they dominate the understory.

In most parts of NY and the NE, deer have been shown to have a significant impact on the composition of understory vegetation.  At very low levels (which are rare in most areas), the understory may contain adequate saplings (stems that have safely grown beyond the browse height of deer) of desirable species like maple and oak.  At more typical populations like those at the Arnot Forest, the desirable species are gradually browsed in to oblivion while the non-palatable species like beech and striped maple dominate the understory.  In higher deer population areas, even the undesirable browse species can't survive and only plants with toxicity characteristics like fern will survive.  Open woods with a dense fern understory may be aesthetically pleasing today, but have a gloomy future when the current overstory trees die.  Same for those with dense beech brush understories.

It's important to keep in mind that from a historical context, most of our current "2nd growth" forests that we enjoy today were established on land formerly used for agriculture.  The better ground was cleared, plowed and fitted for crops while the rougher, poorer ground was simply cleared for pasture.  Starting around the beginning of the last century, large chunks of land were abandoned by farmers and left to revert to the natural vegetative cover: forests.  The abandoned fields and pastures were often ideal seedbeds for the oaks, maples, cherries and ash trees left in adjacent hedgerows.  This also coincided with a time when most ruralites hunted to put food on the table and deer populations were less of factor than today.  The result was that nature replaced the abandoned farmland with the quality forests that today support New York's ~$24 billion dollar forest industry (statistically, about the 5th largest in NY).

Much has changed on the landscape since the current generation of forests were established - primarily the increased pressure from deer and growing abundance of competing forest plant species.  But the way that we harvest our woods has also changed and for the most part has had a negative impact on regeneration.  Consequently, successful regeneration of a current stand in to a quality future stand requires addressing these new factors in a much more deliberate attempt to establish desirable regeneration.  In most cases, good results won't just happen by chance or with the same management of the past several decades (periodic harvests to remove a portion of the merchantable trees).

As for the second part of your question on "how much is enough"?  that's something we will be looking closely at over the next few years as part of a new research project.  Currently, I see it as more of an "all or none" vs. a continuum of results based on the level of protection.  In other words, if you want to grow a good forest back, pretty much total exclusion of deer will be necessary.  A slash wall with a small hole or low spot in it where deer can freely move back and forth probably won't provide sufficient protection to get regeneration above browse height.  Scattered slash or a minimal wall may deter deer somewhat when other food sources are abundant, but hungry deer will still cause about the same amount of damage and impact on the regeneration whether browsing it several times a year, or just when motivated to reach the food source in winter months. Consequently, the strategy for protecting young regeneration from deer should be designed with "worst-case" scenarios in mind.

Other important variables that seem to affect the "how much is enough?" decision are the scale of the exclosure, the overall deer pressure, and the habitual movements of the deer.  For example, if a fence or slash wall happens to cut off a major deer travel corridor, it will need to be more robust to withstand deer that are determined to take a shortcut through the middle.

That is the answer I expected  and feared.  Establishing a deer proof slash barrier is financially unfeasible.

I guess the most I can hope for is to direct the deer with brush piles past hunters´stands.

The costs of an independent fence project will seem significant.  Slash walls, on the other hand, can and should be integrated in to the harvest.  The loggers need to be compensated for the work, but bartering and other concessions can keep the costs acceptably low.  In the case of our slash wall projects to date, we've traded away roughly 20% of the timber revenue in exchange for the slash walls and understory removal.  It's important to note, however, that because the work was done by contractors who specialize in harvesting low-grade timber we were able to sell many of the sub-sawtimber trees.  This extra revenue essentially off-set the costs of the slash walls.  This may not be an option for small sawtimber sales, but at least it worked in our case.

If considering a regeneration harvest with slash walls, I recommend seeking out a consulting forester who specializes in marketing low-grade timber (not all do, the same as not all logging contractors are configured to cut low-grade timber).  Their market and contractor contacts will be invaluable for getting the job done as planned.

Over time, I feel that the "extras" like slash walls will become a more acceptable cost of doing business, just as other "best management practices" like road grading and stabilization have become.  But a key for making this work for everyone moving forward is to have stable and feasible markets for the low-grade timber.

Comment by Pete Keenan on September 6, 2019 at 8:38pm
I was just recently added to the blog. Thank you for adding me. I have a couple of questions. I am an avid hunter. I've applied for hunting access to Arnot Forest this fall. I've read the research papers and watched several presentations on the slash walls. I'm very interested in the posative effects of forest / crop protect from deer. I would also would like to effectively assist in managing the deer herd in the locations I hunt.
My first question is. The Slash Walls create avenues of travel for animals. Every Animal will usually take the easiest route over the shortest. What is the traffic animal traffic like around the walls?
Second Question. Where are the walls located in the forest? Are there locations that combine with natural features to create funnel points or bottle necks?

Most of the walls built to date are visible from Irish Hill Rd and the upper part of Banfield Rd.  I believe the older ones also now show up on Google Earth.

As for the traffic around the walls, I'm going to ask Mike Ashdown to post his observations based on camera footage from the various access points.  For the larger walls, I suspect that some historic deer trails have been disrupted and that deer have had to blaze new trails.  In some cases, these new trails may run parallel along the walls for extended distances.

To date, we haven't seen evidence that the deer have breached the wall because we put it across a main trail. But the weaker the wall, the more likely that could happen.

I doubt that designing walls to "funnel" deer through strategic hunting spots would be effective in the long-term unless perhaps for low-intensity archery or crossbow hunting.  Deer would quickly learn not to run the "gauntlet" if they associated it with danger. The Village of Hastings-on-Hudson is hiring a p/t urban forester!

Appalachian Sustainable Development is searching for a part-time, regionally remote Agroforester to join our team! This new position will be responsible for providing technical and financial assistance to producers for alley cropping and…Continue

Started by Brett Chedzoy in Woodlot Management May 24. 0 Replies 0 Likes

A partial answer to a frequently asked question of recent months - what, if anything, is the DEC planning to do...DEC Announces Aerial Treatment for Spongy Moth in Six High Priority Forest AreasAerial Treatment Taking Place Through Approximately May…Continue

Started by Brett Chedzoy in Woodlot Management May 17. 0 Replies 0 Likes

Well over 200 registered for the March and April webinars presented by Zach Boerman and Suzanne Treyger of Audubon NY - showing that perhaps good forestry really is for the birds!For those of you who would like to watch or re-watch the webinars, the…Continue

I found an ingenious tool for applying herbicide for cut and paint. It is made by a volunteer prairie group in MI but no longer shipped. I am including a link to their page describing its use and with photos.  It appears to be made of standard pvc…Continue

Peter,I have been hearing a lot about mycorrhizae.  Much has raised  many questions.How  can one make mycorrhisae  either for an addition to planting or for later addition to an older plantation and also for gardening.How does it  interconnect with…Continue

We own a 60-acre eucalyptus forest in Pacifica, CA, just south of San Francisco.  Can anyone recommend a forestry consultant to prepare a wildfire risk assessment and mitigation plan?  California has suffered from large wildfires for the past two…Continue

Greetings,Appalachian Sustainable Development (ASD) is searching for an Agroforester to join our team! This new position will focus on alley cropping and silvopasture, and will be responsible for co-developing agroforestry trainings for natural…Continue